Refurbishment of the cathedral school in Güstrow 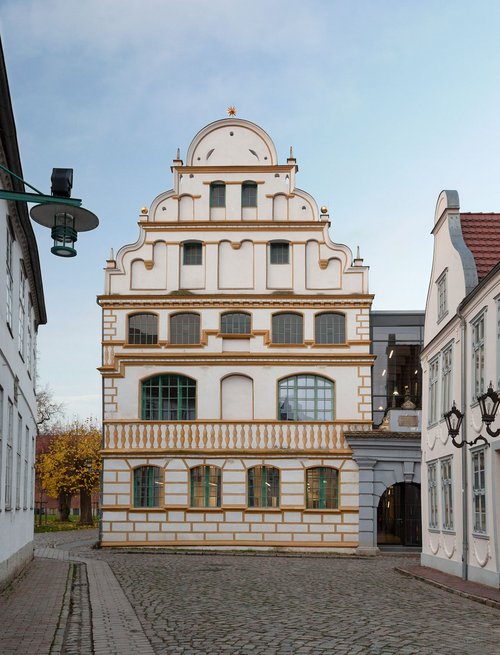 When entering the cathedral school in Güstrow, one encounters a contrast of different, historic architectural styles – the modern main entrance is situated between the Renaissance school building and a utilitarian building from the 19th century. When penetrating deeper into the building, one discovers additional, sensitively emphasised, points of contact with the past.

Between 2012 and 2014, the cathedral school in Güstrow, which is listed as a historic building, was refurbished and converted to become Building 3 of the adjoining John-Brinckman grammar school. The construction project commissioned by BIG-STÄDTEBAU GmbH, acting on behalf of the Town of Güstrow for the refurbishment, was financed with public funds provided by the Federal Government, the State Government and the Town of Güstrow itself. It is assumed that the cathedral school building was designed by the Italian-born architect Franz Parr, and completed by Master Builder Philipp Brandin between 1575 and 1579. It is the oldest preserved school building in current-day Mecklenburg-Western Pomerania. The ensemble of buildings making up the Güstrow School is listed as a historic monument of national importance, and consists of two parts – the old building in Renaissance style with its three-storey timber frame construction, and an extension at right-angles to this building in brick construction dating from 1868. The continuous use of the building as a school stretches back 400 years, and ended in 2001. As it no longer fulfilled the requirements of a contemporary school and had considerable construction defects, the building was subsequently used for storage or left empty. As an example of its function, building design and appearance, it is unique throughout northern Germany.

In 1552, Duke Johann Albert I decreed that "a school with an accomplished school master and two teaching assistants should be founded and a new school building constructed for this in the near future". In 1553, the new cathedral school emerged from the merger of the cathedral chapter school and the municipal school. Its history goes back to 1236 when, as a chapter school, its purpose was the education of the clergy. In 1942 there was another change; the John-Brickman secondary school was merged with the cathedral school. Of special interest is the historic library of the cathedral school. At the beginning of the 20th century, its stock comprised 60,000 volumes, making it one of the largest libraries in Mecklenburg. The stock also includes 19 incunables, prints from the early days of book printing.

Refurbishment of the building fabric

The facades of the building had already been refurbished in 2004, the work also involving the reconstruction of illusionist Renaissance facade painting on the substrate of plaster. Since then, the impressive external appearance of the 16th century historic building could again be seen, but it concealed the fact that the building fabric on the inside was in urgent need of refurbishment, and the progressive loss of building substance had to be stopped. The building surveys revealed substantial damage due to interventions, ageing, insect attack and the effects of damp, as well as structural defects and shortcomings in design. The extension building of 1868 showed evidence of ageing, wear and tear, as well as subsidence and cracking. The expert reports revealed substantial risks to the building substance owing to insect attack and the effects of dampness.

Taking into account these findings, the building was adapted to the spatial and technical requirements of a modern school building, including those relating to building physics and room climate. For this purpose it was necessary, for example, to reconstruct the floors of both buildings from the ground up in order to provide adequate damp-proofing, insulation and loadbearing stability without differences in level. In addition, the walls had to be fitted with horizontal and vertical damp courses to protect them against contact with the ground and then had to be dried out to reduce the moisture content. The plastering on the internal walls had to be renewed and, in certain sections, preserved, stabilised and repaired. 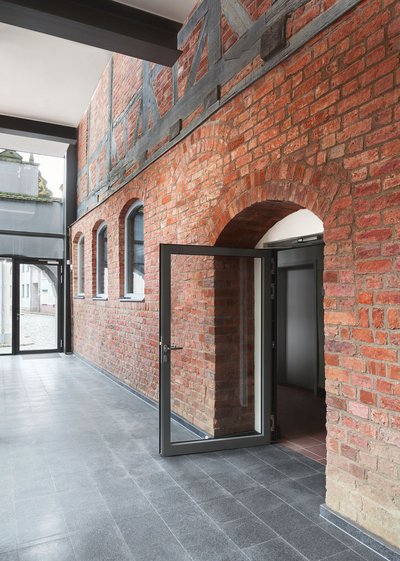 Further work involved the preservation of the timber frame construction and panel plaster, including the coloured, graphical and ornamental designs, in order to document the Renaissance / Baroque appearance as a window into the past. Steel members not visible to users were used to stabilise the building and ensure its loadbearing integrity. The brick facade of the extension building dating from 1868 was refurbished on all sides, with the size of some window openings having to be increased to make space for the installation of escape route doors. The internal doors were refurbished using traditional craft methods, including the colour finishes typical of the era. In order to provide appropriate conditions for modern teaching, the acoustics in the classrooms were upgraded. In order to ensure that the 272 pupils and 12 teachers of the John-Brickman grammar school can use the ground and first floors of the historic school building for additional classrooms as well as subject rooms for art, music and media studies, it was necessary to appropriately enlarge the entrance and circulation areas. To achieve this, a new partially glazed link building was added to the existing buildings as a stairwell. It is used to provide access to the upper floors in both parts of the building – in spite of the different storey heights. The stairwell re-establishes the original access to the buildings by opening the former stairwell openings on the first and second floors. A passenger lift suitable for wheelchair users has been installed to provide barrier-free access to all levels in both building tracts. In addition, a restored timber circular staircase that had been in storage was fitted between the first and second upper floors in the old school building.

Responsible treatment of the history of the building

The objective of the refurbishment was not to re-establish the building to its original condition. Instead, the idea was to recognise the history of the building and to acknowledge it as part of the self-documentation. Owing to the long history of the building, it has gone through several transformations, each with the characteristics of the respective style period – the Renaissance, the Baroque, Classicism and Historicism. In addition, there were the utilitarian modifications in the 20th century. These interventions have resulted in extensive changes to the spatial structure and construction, as well as in the modification of surface finishes and details in the interiors.

Some characteristics of the various styles are clearly visible at various places in the building, and have been preserved. For example, the consequences of the extensive intervention as a result of the 1868 extension were not ignored or beautified in terms of construction design and the building’s history, but were accepted de facto and given their proper place. Only the harmonisation of surfaces carried out in the rooms in the Classical period was partially given up again. The access building not only creates an optimised entrance situation and space for the escape routes from the school – it also serves the purpose of highlighting the alienation of the old building dating from the 16th century by the extension added in 1868. This has been successful because a well preserved and self-explanatory facade of the existing building has been preserved as a wall in the interior of the extension. To achieve this, the eastern facade of the 1868 extension and parts of the floors were dismantled at the point where the extension meets the cathedral school building at almost a right-angle, so that the facade of the older building can be recognised again in its historic context. The stair runs of the vertical circulation have been detached from the existing inside facade of the old building so that the historic depth of the building can also be perceived in the third dimension without obstruction. Likewise, the lift in its glazed display cabinet-like structure avoids an imposing presence with the result that the importance of the existing fabric is not reduced.

No serious modifications to the existing room layout were carried out so that the room schedule and user requirements had to fit in with the given arrangement. On the first floor, any inner partitions out of keeping with the style were removed. In order to achieve a functional division of the space on that floor into two rooms, one separating timber frame wall was retained and acoustically upgraded. Likewise, the longitudinal timber frame wall of the access corridor has been retained for functional and structural reasons. However, contrary to a rational layout, the wall runs directly towards a reconstructed opening in the facade on the eastern gable side. This confrontation between the historic building fabric and later additions has been elaborated in order to highlight this part of the history of the building; to do that, the timber frame infill material immediately in front of the window was removed in order to give the window its proper due.

The refurbishment of the listed cathedral school in Güstrow is an outstanding example of how the history of a building can be brought to life. Modern functional requirements were harmonised with the need to preserve extremely important historic building substance without having to limit the use to that of a museum.