New construction of a laboratory building complex for ESA in Noordwijk

At Noordwijk on the North Sea coast in southern Holland, the European Space Agency (ESA) operates an extensive development centre and test facility for space vehicles, ESTEC (European Space Research and Technology Centre). At the heart of the facility, a new laboratory and research complex was to be created on the demolition site of former buildings with asbestos pollution. In addition to a new approx. 120 m long, four-storey office building, which had to be extended by a further 24 metres already during the construction phase, a diverse range of buildings for physics laboratories with sophisticated construction requirements was created. 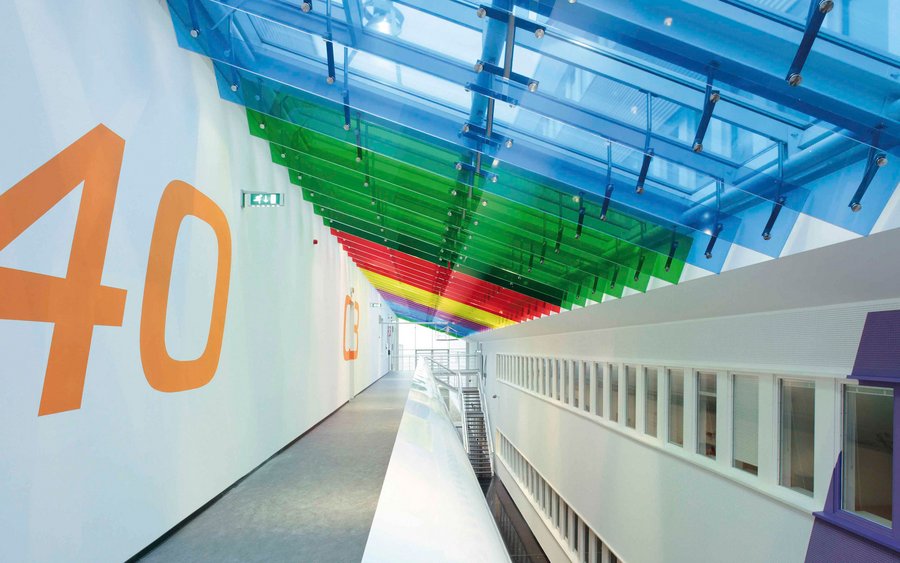 A large centrifuge system with a diameter of 8 metres for experiments under the effect of maximum earth acceleration of up to 20 G was one of the special items. In contrast to the dynamic centrifuge, a completely quiet clean room with a test field benefitting from the attenuation of vibrations, referred to as the seismic block, with a size of approx. 17 m x 4 m, had to be constructed for experiments with micro-drives for the control of satellites. This area had to be decoupled from its surroundings so that neither the vibrations from the wave movement of the 300 m distant North Sea nor those from the vehicular and pedestrian traffic, nor the effects of wind on the building, nor the vibrations from neighbouring test facilities could be measured.  Likewise, the electron microscope systems had to be accommodated in rooms with vibration attenuation.

Yet again, at other locations in the building, clean rooms for mechanical tests with large vibrators had to be built for the investigation of the behaviour of equipment and materials used in outer space. For the simulation of large temperature fluctuations of between -185°C to +100°C, a test area with vacuum chambers was provided. In order to generate these low temperatures with liquid nitrogen, four gas tanks with a volume of 120,000 litres were installed on the north side of the building. A specially screened room had to be constructed for tests with radioactive material.

The roofed-over connection corridor between the new laboratory building and the administration building – the so-called Mall – is a design highlight; 144 glass panels in five colours fitted beneath the glass roof are reminiscent of the solar sails of a satellite. The black floor slabs made of reconstituted stone with glitter particles could be imagined to be a night sky with scattered stars.