Leonie doesn’t look very conspicuous, but she conceals a secret under her metal frock. Apart from small additions to the body, this car with a girl’s name looks like a serial production car. However, Leonie drives herself, with no driver, even in busy urban traffic. This high-tech car is one of the forward-looking projects of the Automotive Research Centre Niedersachsen (NFF). At its new facility at the Research Airport in Braunschweig, the NFF carries out interdisciplinary research and develops solutions for the challenges posed by dense inner city traffic, such as autonomous cars and low-emission power trains. The facility is home to seven research institutes of Braunschweig Technical University. The State of Lower Saxony and the Federal Republic of Germany, as well as Volkswagen AG, have invested a total of EUR 48.9 million in the building and the research equipment.

The new building consists of the institute building with offices and group rooms, the seminar and teaching facilities and the technical tract. A landscaped inner courtyard connects both wings of the building. Each of the three main functional areas was designed around very divergent space and technical requirements.

The Institute has been designed as a three-storey head building that accommodates the offices with the "project houses" and the seminar and conference area. Visitors and users enter the building via the main entrance at Hermann-Blenk-Strasse. All public areas, such as the lecture and conference rooms, the library, the PC pool and the cafeteria, are accessed via the extensive concourse. The facade facing Hermann-Blenk-Strasse to the south is glazed, and offers generous views from, and into, the building. The seminar rooms and the library on the ground floor face the quiet inner courtyard. The seminar and conference area with auditorium can also be used by external companies for conferences and meetings.

The offices on the two upper floors have been laid out along the outside of two access corridors either side of a central tract, creating ideal conditions for interdisciplinary cooperation. Effective communication between Institute staff is enhanced by the flexible layout, a high degree of transparency and vertical communication zones straddling several storeys. In particular, the so-called "project houses" open up new possibilities. They consist of group offices which are temporarily available to interdisciplinary research teams for work on shared projects.

The parts of the new building dedicated to theoretical and practical work are closely linked. The researchers only have to walk a short distance from their offices in the Institute building to the test hall behind the head building. The central focus of the technical tract is the double-storey hall with its generous open space. In accordance with the NFF concept for an open world of work, this space is used for test installations for project work shared by different departments. None of the departments has been allocated specific space in the technical tract; instead, it is intended that the available space be used as and when needed as agreed between the different departments. Because the available space has been designed for open access, the teams carry out their research in close proximity to each other and become more aware of the subjects of other departments and working groups, thereby leading to better interdisciplinary communication. In this fashion, the open world of work of the building predetermines a working concept which has an impact on the behaviour of its occupants.

The engine test stands, the test stands for large equipment, the electrical drive area, workshop and storage areas, are spatially separated and have been arranged in U-shape around the main space in the hall, which is accessible to vehicles. The upper floor accommodates the laboratories for ecological chemistry, the component test stands, the E-laboratory and the staff rooms. In addition, the plant rooms with their complex installations and building services for the test stands have been arranged on this floor.

On the test stand

The test stands in the technical tract include a climate-controlled roller-type test stand, a drive train test stand, a hydropulse test stand and 16 acoustically insulated engine test stands. The climate-controlled roller-type test stand is used, for example, to test the behaviour of vehicles under special climatic conditions, such as extreme low temperatures. The hydropulse test stand provides the facility, with four vertically adjustable hydraulic cylinders, to test the forces acting on a vehicle travelling on a stretch of road in poor condition. For this purpose it was necessary to provide the electrical installations for a large hydraulic aggregate as well as appropriate cooling to discharge the intense heat developed by the aggregate.

Furthermore, research on power trains can be carried out on a separate test stand. Four generators are used instead of wheels to simulate various load scenarios for the power train, which consists of the gearbox, the drive shaft and the differential. The machines used for simulating the loads generate electrical power and heat, which are utilised in the building.

The engine test stands are used by the researchers to test engines in load cycles in order to replicate realistic service conditions. In this way, they obtain information on items such as fuel consumption and exhaust emissions. The services installations, in particular the cooling and air extraction systems, have been designed to respond quickly to the changing conditions resulting from the engine load changes and the partial operation of the engine test stands in order to ensure consistent test conditions. The temperature levels in the building are controlled by three different cooling circuits. 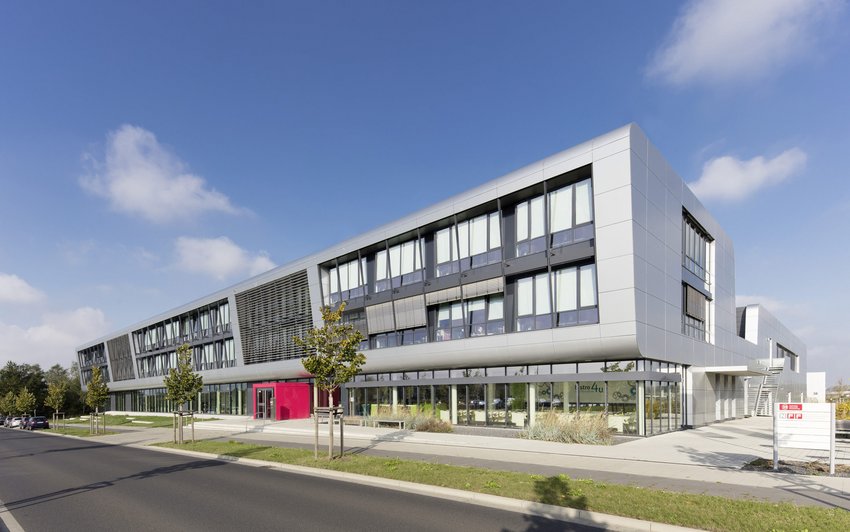 The engines can be operated with conventional fuel, liquid petroleum gas, natural gas and hydrogen, which require extensive safety provisions and an elaborate emergency shut-off concept. In view of the fact that the engine tests are carried out in accordance with national and international standards, the requirements for compliance with the regulations are very exacting. For example, the combustion air of the engines is preconditioned to meet the regulations.

The building envelope consists of aluminium sandwich panels. Owing to the light weight, smooth surface and colour of the panels, the dynamic facade design and the choice of material evoke associations with automobile construction. Both the Institute and the technical tract are linked by their shared external envelope, and thus form a distinguished shape. Due to the receding construction and the mullion/transom design on the ground floor, the Institute building appears to be floating, an effect which is further enhanced by the slight tilt of the facade of the two upper floors.

The two buildings are strongly integrated with each other, not only by virtue of the building envelope, but also by virtue of the clear circulation concept and the materials used for the interior. For example, the floor finishes are the same in the stairwells, in the open area in the test hall and in the circulation areas. A central concourse leads from the foyer in the head building to the gallery in the technical tract. A guide system is used for the general orientation. 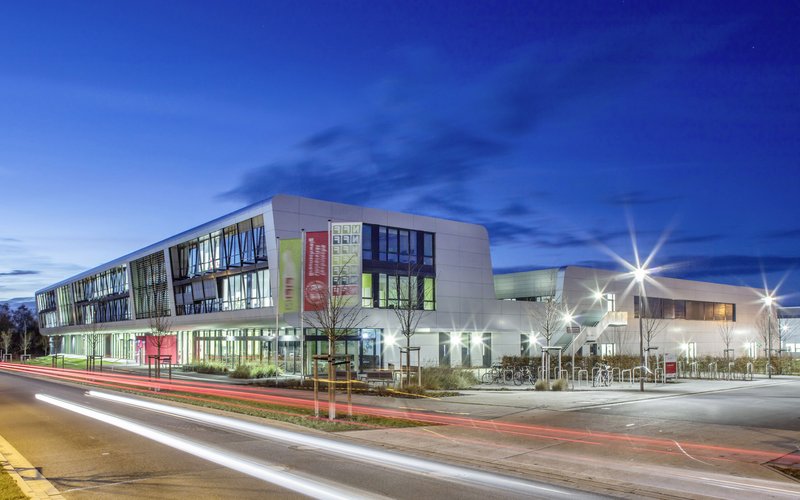 The new building has been designed as an energy-plus building which, on an annual basis, generates more electricity than it consumes. In order to cover the energy requirement of the building, the existing energy sources within the building were predominantly used. For example, electricity is generated by the operation of the combustion engines in the technical tract as well as by a photovoltaics installation. It is not cost-efficient to store excess electricity, which is why it is fed into the public power network. In addition, the energy requirement of the building was minimised by appropriate detailing of the design, and the energy supply was optimised through the use of efficient electrical installations. Generous fenestration and rooflights, and the shallow depth of the building, combine to provide good natural lighting to the main service area. In the inner courtyard, the light-reflecting metal facade on the south elevation of the test halls maximises the natural light projected into the north-facing offices. Light-coloured louvres with light-directing function have been fitted in the top area of the windows in order to provide shading of the fenestration facing east, south and west. A horizontal, movable louvre system on the south side of the head building provides highly efficient solar screening. In addition, the energy requirement has been reduced through the use of energy-conserving lamps and a clever control system for the artificial lighting.

The ventilation of the entire building complex is largely controlled, and the heat from unpolluted exhaust air is recovered. In winter this makes it possible to conduct the exhaust air via a heat exchanger, with the recovered heat being used to warm up the fresh incoming air. In addition, passive solar gain is made possible in winter by the large south-facing fenestration with a high energy transmission value. Internal machines and installations represent additional sources of heat which, in winter, contribute to a reduction of the space heating requirements, for example the waste heat from the combustion engines, with a temperature level of 60°C, and from the cooling water in the engine test stands. This concept creates comfortable interior climate conditions without causing environmental pollution. At the same time, the compact shape of the building, the high-quality insulation, the air-tight building envelope and the controlled ventilation ensure that the heat loss through transmission and ventilation is very small.