New construction of a department building for Ruhr University Bochum

As part of a comprehensive refurbishment, the Bau- und Liegenschaftsbetrieb (BLB) NRW Dortmund acted as developer for Ruhr University Bochum for the purpose of building the two new ID and IDN buildings on the site of Ruhr University Bochum. The department buildings are providing space for offices, seminar rooms and laboratories. The ID building has a usable floor area of approx. 25,000 m² and has been fitted with heating and cooling installations based on concrete core pre-heating, geothermal heat supply and heat pump technology, which results in a reduction of energy consumption. The design for the two university buildings was produced by the architects’ practice, pbr Planungsbüro Rohling AG. The groundbreaking ceremony for the construction of the new ID building took place on 20 March 2009. This building for the electrical engineering and information technology departments was completed ready for the 2010/2011 winter semester.

By installing a geothermal probe array during the first construction phase, the basis for the deployment of modern technology was put in place. In the period from November 2008 to February 2009, a total of 71 geothermal probes were inserted to a depth of 150 m to provide heat for the ID building. 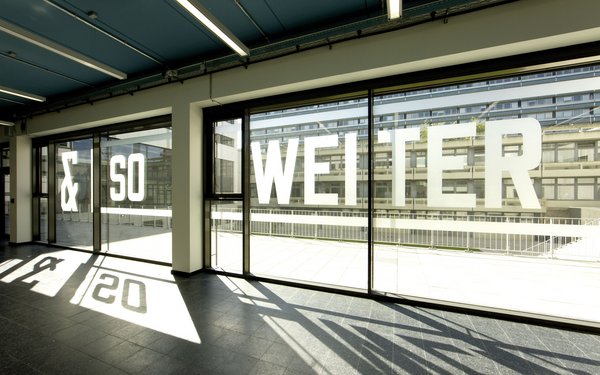 The average ground temperature from a depth of 15 m is approx. 10°C; this is used by the geothermal probes to absorb heat from these layers of ground close to the surface and to store it for the purpose of heating the building. The heat pump system absorbs heat from the ground and provides it at the condenser of the heat pump as heat output at a temperature of between 33 and 55°C for heating the building. During the summer months or where there is a need for cooling owing to the heat emissions inside the building, the system is used for cooling the building. The thermal energy withdrawn from the building by the cooling system can be discharged to the ground via the heat pump system, where it is held in interim storage during winter.

The geothermal probes were inserted using the hydraulic circulation drilling method. In this system, water is used for cooling the drill head and for transporting the spoil to the surface. The probes inserted were double U-probes made of polyethylene (PE), which had been supplied ready assembled for a drilling depth of 150 m. After inserting the geothermal probes into the open borehole, the annular space between the probes and the ground/rock was injected with a bentonite suspension, working from the bottom up. According to the current state of technology, the thermal conductivity of bentonite is 2 W/mK, which is close to the average thermal conductivity of the surrounding earth.

An application for the hydrological permission was submitted to the Arnsberg mining authority in charge of the area as part of the general planning permission procedure. Stipulations imposed as part of the process, such as the necessary certification of the drilling company in accordance with Working Sheet 120 of the German Technical and Scientific Association for Gas and Water (DVWG), were complied with. During the drilling process it was important to ensure that no permanent artificial contact would be made between the groundwater storeys. The drilling company had to provide evidence that the separation between the groundwater storeys was maintained. In addition, the water authority requested records and surveys of the ground layers in accordance with DIN 4022 after the drilling, including information on the groundwater level encountered, the flushing losses, the cavities and crevasse formations for each individual hole. This extensive documentation demanded a high degree of specialised qualification of the drilling personnel.