Researchers studying atoms require extremely precise technology in order to arrive at reliable results. A modern laboratory and office building with highly sophisticated laboratories has been created for the chemistry and physics departments of Dortmund Technical University on the southern plot of Campus Nord. These facilities are used for researching processes at nuclear level.

As part of the university modernisation program, the Bau- und Liegenschaftsbetrieb NRW, the State of North Rhine-Westphalia and Dortmund Technical University are investing over EUR 50 million in the building. The replacement building for teaching and research constitutes the first of four steps of a masterplan for the extension and modernisation of the campus. Once this new building has been completed, the existing buildings housing the chemistry, physics, electrical engineering, economics and social sciences departments will be stripped out in sections and refurbished from the ground up. In addition, new buildings will be created for the departments, for example a facility for practical training.

The six-storey ring-shaped building with an unroofed inner courtyard appears – from the outside – like a compact block with a facade of red clinker bricks and large fenestration bands. The entrance area at Otto-Hahn-Strasse is characterised by a two-storey recess in the building and a system of staircases and ramps. Between the plinth storey E1 and the upper floors, the E0 level creates a visible division in the form of a glazed joint. The E1 level has been sunk into the sloping terrain, and is partially covered by the ground.

The laboratories have been concentrated in the new part of the building following the new layout and concentration of the physics and chemistry departments in one area in order to keep the distances between the functional units short. The new building now houses a large equipment centre and the predominantly highly serviced laboratories of the campus on a main usable floor area of 8,600 m². More than half of this area is occupied by laboratories. 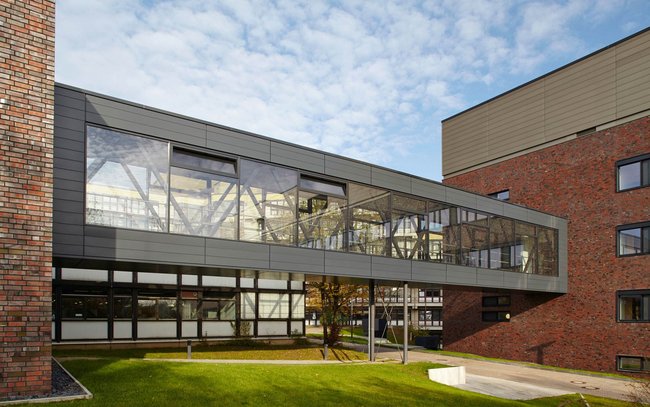 The different functional areas comprising the physics and chemistry laboratories, practical training and seminar rooms, offices, as well as general and ancillary areas, have been vertically layered around the inner courtyard. The five full storeys and the two-storey technical services facility have been arranged in the building as a ring, mostly in a double-loaded layout, with laboratories on one side and offices on the other side of a central corridor. The offices have been placed on the south side towards the inner courtyard, benefitting from optimum daylight conditions. The large practical training rooms on level E0 break the double-loaded pattern.

The layout of the functional units takes into account any functional relationships between the different work groups. The stairwells and lifts have been placed at the four building corners. They form the boundary of the functional areas on the respective floors. The enclosed work areas are accessed from the stairwells via corridors and are equipped with access control systems.

Level E1 houses the physics laboratories as well as the large equipment centre with laser laboratories of classes 3P and 4, spaces for the installation of scanning tunnelling microscopes and a nuclear magnetic resonance device. With the help of supra-magnets it is possible to carry out highly precise measurements. The plinth storey has been designed with a clear height of five metres to provide enough space for the installation of large items of equipment. These large items can be delivered at ground level via a suitably constructed external entrance.

The plinth storey is not laid out in the shape of the ring, but consists of a square area. It houses the functional units with parallel corridor zones which ensure that none of the units are divided by circulation routes. Some of the areas have been built with decoupled foundations to reduce vibration. This prevents any vibrations from the operation of the close-by city railway line from interfering with tests or falsifying the results.

Public areas such as the entrance hall, the corridor zones next to the practical training laboratories, and the stairwells are generously glazed. The large equipment centre can be viewed from the entrance hall at level E0 and receives daylight from the full-height glass facade towards the inner courtyard. The work area for students at this level has been designed equally as open, offering a view to the inner courtyard. On the interior, the building is limited to a few hardwearing surface finishes and elements. All technical installations beneath the structural ceiling are not concealed by suspended ceilings. This means that these installations are accessible at any time for any upgrade installation or maintenance.

Conditioned air and heat where these are needed

A number of ventilation and partial air-conditioning systems supply the various departments of the building with fresh air. The aggregates for these systems consist of four ventilation units located on the two-storey D4 level. All ventilation systems benefit from highly efficient heat recovery units in the form of layered heat exchangers, and the partial air-conditioning system uses a system for the recovery of cooling energy. The layered heat exchangers work with hydraulic distribution so that the heat from the exhaust air unit does not have to be conducted to the associated intake air unit; instead, the heat can be transported to systems in other areas where it is needed via a distribution manifold. In the laboratories, 75% of the thermal energy is returned.

Heating and cooling for air-conditioning is generally provided by the university’s central network. Most of the chemistry laboratories do not have any special requirements regarding room air temperature and relative humidity. However, some special chemistry laboratories require constant temperature levels, which can only be generated by the additional decentralised cooling systems in the plant rooms. For example, the room temperature in the large equipment centre of the chemistry department, and in most physics laboratories, is 22°C throughout the year. In these rooms, the relative humidity must not exceed 45%. These laboratories are separated from the warmer areas by airlocks so that no warm air can flow into these laboratories. Likewise, cooling is required in the laser laboratories owing to the large amount of heat developed by the test instruments and the need to maintain constant room air conditions.

The nuclear magnetic resonance devices require special conditions. The rooms are fitted with internal timber stud partitions with aluminium doors and most of the pipework is non-conductive, measures that are required owing to the strong magnetic radiation of these devices. Safety corridors and hermetic fields are provided to ensure that equipment that is sensitive to strong magnetic fields is not damaged. The laboratories are fitted with flexible infrastructure regarding the supply of media connections so that a number of different scenarios can be implemented for the setting-up of equipment.

The high cooling load of the nuclear magnetic resonance devices is covered by an evaporation cryostat with liquid helium as coolant. The cooling output is achieved by the evaporation of the helium. The valuable gas in the system is captured and treated in a recovery plant in order to re-utilise 98% of it in a recycling system, or to make it available for testing. The helium gas is trapped in balloon-shaped collecting stations and is then liquefied in high-performance compressors on the ground floor; thereafter it is stored in 6 m high high-pressure tanks and series of gas bottles. 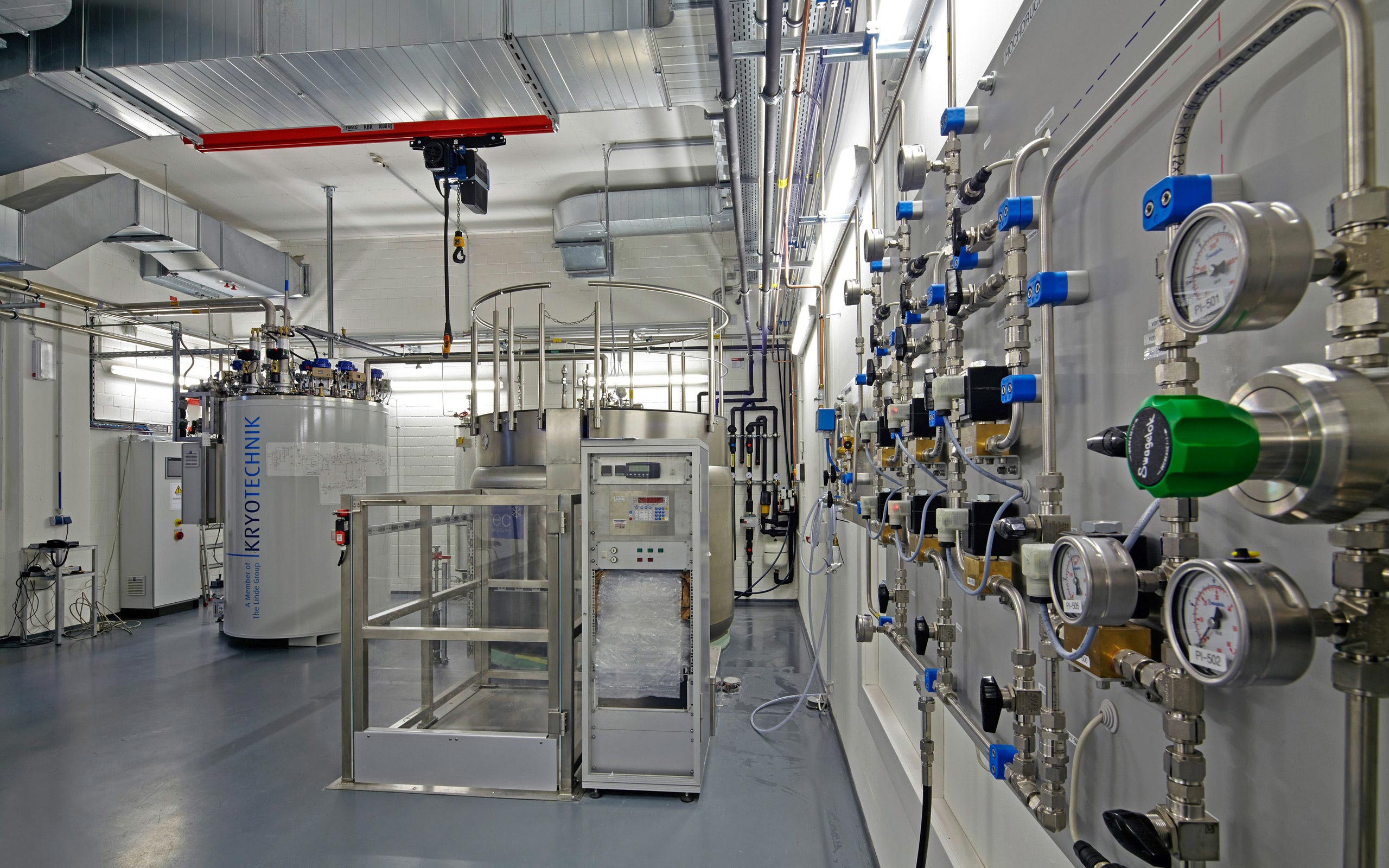 The helium system was constructed by cryvotec Vorbuchner GmbH & Co. KG, Cryo Anlagenbau GmbH and Linde AG. Decentralised users of helium at the campus are provided with helium canisters via a direct filling system. In the case that helium escapes in an uncontrolled manner, oxygen sensors trigger the flooding of the room with fresh air when they register a critical value. The laboratories are supplied with technical gases, central compressed air and nitrogen. In addition, different types of gases are supplied from decentralised sources, such as hydrogen and argon, and also cooling water connections.