Facade and roof refurbishment of the cattle market in St. Pauli

Where in former days 2,500 cattle and 3,000 sheep were offered for sale on each market day, numerous visitors now browse between market stalls. Feasting, tasting, enjoying. The cattle market has become a focal point, a point of attraction, a place full of life – especially after the refurbishment in accordance with listed building requirements.

During the war, air raids destroyed entire quarters of Hamburg. The central cattle market located at Heiligengeistfeld, which included the cattle market hall, also fell prey to the raids. The cattle trade in northern Germany, which had had its main market at this location since 1889, lost its most important facility. Following the normalisation of commercial life in the subsequent years, it was intended to re-establish this important outlet. Whilst the high stables, the cattle loading ramp and smaller functional buildings could be swiftly repaired, the reconstruction of the 14,200 m² cattle market hall dating from 1889 required complete redesign. In 1950, the architect and engineer Heinrich Konrad Havemann reconstructed the building on the well-preserved foundations, using the same layout. The special feature of the new construction was the quality of light in the market hall and the uniform height.
The roof structure was supported by four steel columns only so that the floor area was available as one continuous market area up to the external walls. This made it possible to use the facility for a wide range of functions which meant that, as focal point for large events, it became enormously important for the City of Hamburg both in terms of commercial viability and in the public awareness.

Re-installation of the north facade as shop window

The existing facade of the cattle market hall consisted of a lime/sandstone brick backing, a cavity, and a 10.5 cm thick orange/red facing brick in the Oldenburg format. Extensive conversions were carried out once the cattle trade had ceased and retail companies moved into the building. The appearance of the hall changed drastically not only because of the installation of a mezzanine storey as parking deck, but also due to extensions in the entrance and delivery areas, large trapezoid sheet cladding and the installation of plastic windows. In order to re-establish the special character of the original building, the subsequently fitted metal sheet facade in the north, east and west, including substructure, as well as the extension for the main entrance and extensions to the south, were completely dismantled. In view of the fact that the existing brickwork had suffered considerably, extensive brickwork refurbishment – including full repointing and the repair of cracks, as well as the insertion of spiral anchors as wall ties – became necessary. Some sections of the walls were completely rebuilt. With reference to the original design, the north facade was reinstated with the original facade sub-divisions as a representational feature. This required large sections near the entrance situation to be completely removed and reconstructed. Where possible, existing facing bricks were used, and any missing quantities of bricks were replaced by new identical ones. 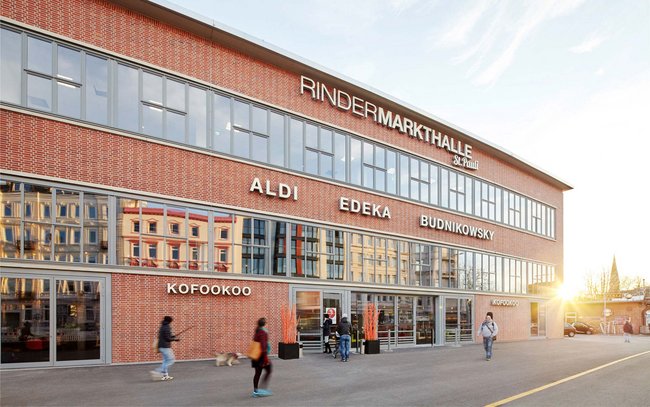 The cattle market hall was well known for its light-flooded space; fenestration bands at ground floor and first floor level emphasised the spatial effect of the building. The facade design was sub-divided and enhanced by numerous steel doors and the stairwells with large glazed areas protruding slightly from the front line. These were characteristics that were to be re-established in the present building at all costs. Therefore the former fenestration bands in the mezzanine storey, and the steel doors, were replaced by new windows and doors in the historic style; however, to replicate the original sub-division of the elevation, they were placed in the original positions where, in parts, the steel substructure was still in place. For important fenestration in the north facade, such as the generous stairwell glazing, the old steel windows – which were still in existence in the original condition – were completely refurbished and newly glazed, showcasing building conservation at its best. The doors were refurbished with historic details such as horizontal wooden handles and metal bars. In order to avoid thermal bridges, the new thermally separated doors and windows were fitted with core insulation at the contact faces with the existing brickwork and, in parts, with internal insulation consisting of calcium-silicate panels.

Even though the 1972 parking deck that had become necessary for the use as a retail facility had significantly reduced the spatial width of the building, the cattle market hall to this day impresses with its forward-looking roof construction and the amount of daylight it admits. The 3.80 m high Vierendeel steel girders, with a span of 300 m, rest on four central columns and the peripheral structures, thus forming a large sectioned and curved sawtooth roof with north-facing fenestration. At the time of its construction, the roof was covered with about 8 cm thick pumice block slabs on the steel framing. Although the listed steel structure had essentially been preserved unchanged, it became apparent that the pumice block slabs could not be retained due to their age and structural requirements, so that the roof had to be completely overhauled. In view of the fact that the pumice block slabs could not be fully removed during the overhaul process and the new roof covering with concrete slabs did not become structurally effective until fully completed, including joint filling, the removal and replacement of the roof covering was carried out in sections on alternate sawtooth elements. Since the original structural calculations were not available, it was determined that the loads of the existing roof structure should be considered as the maximum permissible so that the new concrete slabs had to be in the form of prefabricated lightweight concrete elements in LC25/28 with a thickness of just 80 mm.

The coating and corrosion-proofing of the steel framing presented another special challenge owing to the steel substructure. At the time of construction the steel members had been finished with a rolling skin; although this provided good corrosion protection, it made processing the steel difficult due to its hardness and, by modern day standards, does not provide an adequate substrate for a coating finish. For this reason, the entire steel structure was fully sand-blasted and newly coated. The new sawtooth roof glazing measures 2.6 m in height and, in view of the existing load assumption resulting from the conversion with plastic trapezoid glazing, has been implemented in the form of double-rebated plastic windows.

The fact that it is worthwhile preserving a building with such a historic background is illustrated by the cattle market hall in Hamburg with its scores of visitors every day. This is one of the reasons why the project, as a local shopping centre that serves as an example throughout the Federal Republic, was awarded the European Innovation Prize in the "City" category on 3 February 2015. This prestigious prize is awarded by the German Council of Shopping Centres (GCSC).