Refurbishment of the Königin Elisabeth Herzberge Hospital in Berlin Lichtenberg

The epilepsy clinic in building 2 of the protestant Königin Elisabeth Herzberge (KEH) Hospital in Berlin Lichtenberg was ceremonially opened in May 2014 after a 2-year refurbishment and conversion phase. The project involved the refurbishment of the building and the services installations, as well as conversion work to accommodate appropriate modern medical facilities. 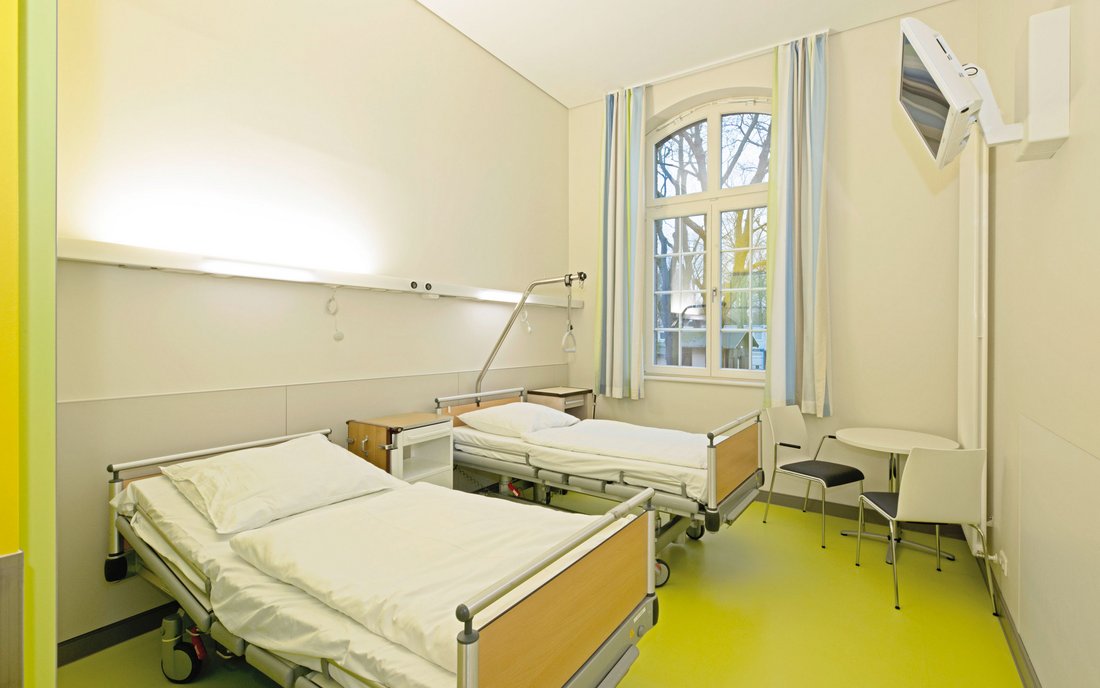 The work included fire safety measures and an energy upgrade, as well as extensive renewal of the services installations. The design and planning for the modernisation was carried out Planungsbüro Rohling AG (pbr). The client is the Evangelisches Krankenhaus Elisabeth Herzberge gGmbH. The construction cost for the work on building 2 and building 4 opposite amounted to EUR 16.8 million. Furthermore, pbr AG provided the entire design for the latter building for the treatment of epilepsy patients with multiple disabilities, geriatric and physiotherapy patients.

Building 2 of the protestant Königin Elisabeth Herzberge Hospital was built at the end of the 19th century to the design of the erstwhile city architect Hermann Blankenstein, and was used as an extension to a medical institution for the mentally ill. This has been included in the list of historic monuments of the State of Berlin since 1982.

Building 2 was refurbished and converted to suit the requirements of a modern hospital and care organisation. The design for the refurbishment work was coordinated with the Listed Building Authority in charge of Berlin Lichtenberg. The existing construction and building fabric were largely retained. In addition, the original elevations of the building – that now enjoys listed building status – were extensively reinstated.

The oblong three-storey building, with its single-loaded design and with central and side projections, was built in solid construction with some ornamental brick facades. The central wings and side projections of the ground floor and first floor accommodate bedrooms, therapy rooms and day rooms, including the necessary office and back-up rooms. The children unit (EP1), with 24 beds, is located on the ground floor. The adults unit (EP3) with a total of 26 beds is located on the first floor. All bedrooms were equipped with sanitary cells with WC, washbasin and wet-room shower. The building was completely stripped out.

Epileptology is a specialist branch of neurology, which has its roots in both acute care and in rehabilitation. The treatment concept that has evolved from that background includes medical, psychological and social aspects which, collectively, are referred to as comprehensive care.

The treatment includes training in coping with everyday life, training on the medical condition and its concept, pastoral care, psychosomatic/psychotherapeutic treatment, bio-feedback training and special occupational therapy and physiotherapy. For this purpose, the 2nd floor includes rooms for special therapeutic staff such as psychologists, social workers, occupational therapists and diabetes consultants. In addition, the projecting side wing to the west has apartments for visitors.