New construction of a production line for Hydro Aluminium in Grevenbroich

Grevenbroich in Düsseldorf is already one of the largest facilities for rolled aluminium products in Europe. Hydro, the Norwegian aluminium group, is continuing to expand its factory there by constructing a new automobile line, the AL3, by the end of 2016. From 2016, the factory will produce particularly lightweight aluminium for the manufacture of car bodies. By using this lightweight material vehicles save fuel and, over the entire lifecycle, emit less CO2. The overall design for the new construction of the production line has been commissioned from pbr.

The new state-of-the-art facility is being built to the north-west of the existing works site in Düsseldorf/Grevenbroich, and comprises a production hall, ancillary buildings and a high-bay warehouse. The EUR 130 million investment increases Hydro’s production capacity for aluminium automobile body sheeting from currently 50,000 tonnes per year to 200,000.

The centre of the new development will be the elongated three-aisle production hall with the automobile line 3, an annealing and coating line, and the rolling line with EDT process. The building has been designed as a steel structure with insulated trapezoid panel facade and a concrete plinth at the periphery. On the basis of a colour scheme and material concept, which has been produced in close cooperation with the clients, the 190 m long facade is structured by profile panels with coatings in different colours.

In order to allow for the future building of extensions, and for conversions, only whole profile panels are used for coating so that no special formats have to be made. Fenestration bands run along the hall in the upper section of the facade. The coil haulage way with two coil cranes and a handover opening between the hall and the high-bay warehouse will be constructed in the central aisle of the hall. The side aisles will also be equipped with overhead cranes above the annealing and coating line. The 30 m high and 100 m long high-bay warehouse has been designed in solid reinforced concrete construction and will follow on directly from the eastern gable of the production hall. The fully automated warehouse is only for the purpose of the interim storage of coils. The coils are transported to the haulage way in the production hall with the help of a special handling unit. The warehouse is connected with the existing automobile line AL 1/2 via a steel bridge.

Two- to three-storey ancillary buildings will be constructed along the production line building, accommodating offices and meeting rooms, staff rooms and sanitary facilities, as well as the plant rooms for the building services. 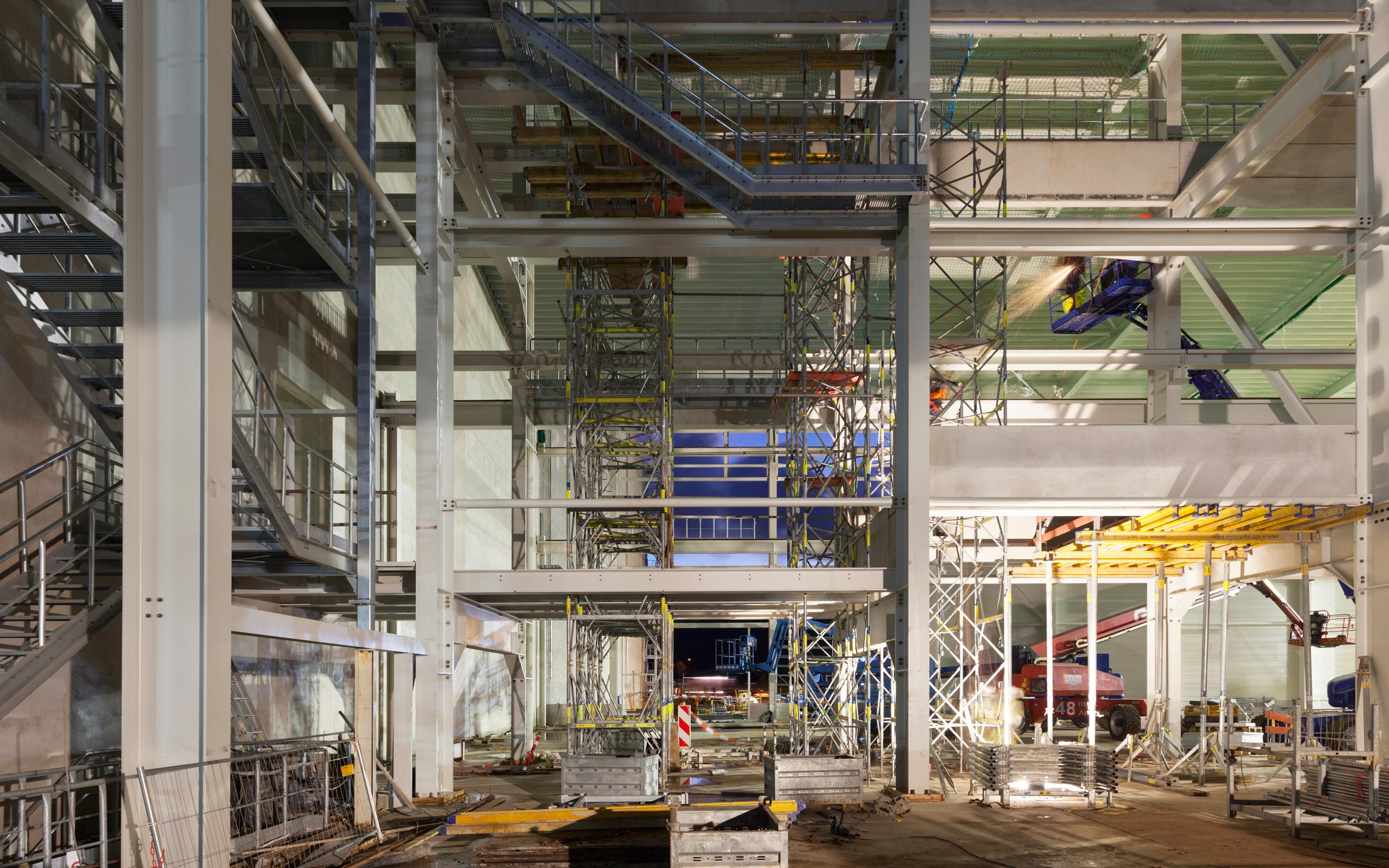