RAUCH Landmaschinenfabrik GmbH is a family-owned global company manufacturing products for fertiliser, sowing and municipal technology. The company’s three facilities in Sinzheim, Bühl and Vimbuch near Karlsruhe, which have been operating since 1921, had reached their production and storage capacities so that these facilities had to be replaced by a new factory.

As subcontractor of the industrial designers i+o, pbr was commissioned to produce the scheme design and planning application documents for the new central production facility at the Baden-Airpark industrial estate near the Karlsruhe/Baden-Baden airport, and to produce a functional specification in order to place the detailed design and construction of the factory with a design & build contractor. During the construction phase, pbr AG was also involved in site supervision.

The first complex design task was to work out an optimum site layout for the different functional units on this 40,000 m² plot, taking into account the future routing of adjoining railway lines and the preservation of existing wildlife habitat links. A number of variations of the site layout plan were produced to demonstrate the different options for developing the site.
In addition to the 15,000 m² production building, areas had to be provided for an automated warehouse for semi-finished and finished parts, for staff parking, and for an existing test building in the form of a lightweight tensile structure for spreading tests, as well as open areas for a future office building.

Following completion of the site layout plan, the next step was to devise a logical layout for the various functional areas in the production hall, such as incoming goods, storage, metal sheet processing, welding, prototype construction, paint shop, assembly and goods dispatch and, in addition, to create space for offices, staff and plant rooms.

The single-storey building consists of a steel skeleton structure with thermal insulation panels in the facades. An interesting appearance is created by fenestration bands, canopies with a wide projection and projecting extensions. The two-storey office and staff area, which forms part of the building, is located near the access area and features a conspicuous colour scheme to distinguish it on the outside. 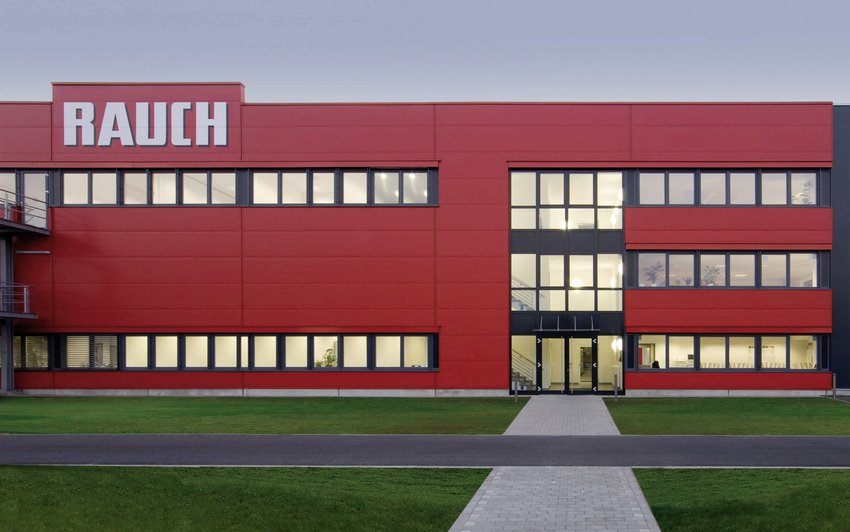 The new factory was handed over for operation on 24 October 2009 after a construction phase of 10 months. Now the new facility with its 220 members of staff produces approximately 15,000 machines per year true to the RAUCH strapline "Wir nehmen’s genau" (we take precision seriously). In view of the fact that the facility is conveniently located near the airport, pbr AG was able to use its own small airplane to travel to the site and thereby had the benefit of seeing the state of the construction progress from the air.