New construction of EmslandArena in Lingen

Balanced acoustics for pop concerts, a rugged concrete slab as floor during concerts and, two days later, sprung flooring for ball sports or for additional seating for entertainment events – the requirements for a multi-purpose arena vary enormously. With its range of technical installation elements, EmslandArena in Lingen is equipped to accommodate a wide range of different events for up to 5,000 visitors. Having been appointed for the overall design, pbr AG completed the scheme design for the new construction of the multi-functional venue in Emsland.

EmslandArena, with its footprint area of 5,500 m², comprises an events venue, an associated foyer and the secondary functions. Its main asset is its multi-functionality. The stage can be placed flexibly on the large area available and can be adjusted in size to suit requirements. To suit this situation, various seating arrangements can be adopted on the parquet. A suspension grid consisting of longitudinal I-beams and variable intermediate cross-beams nearly covers the entire area so that items – such as stage equipment – can be placed at almost any point in the venue, thereby supporting multiple functions. In addition, small side stages are available that can be used for complex sound systems, instruments and stage props, or for temporary artist changing rooms, thereby making it possible to accommodate a wide range of production requirements, which can be very different for different artists. The stage area can be reached easily from the outside, with a direct route via loading zones. The telescopic seating can be fully retracted into the recesses provided for this purpose so that it is possible to convert the pitch used for a handball match into an area measuring approx. 60 x 20 m, such as is needed for horse riding events with their larger space requirement. All tiered seating consists of a stationary reinforced concrete component and a retractable element.

The movable grandstand is constructed of hollow steel profiles supported by a gas-sprung carriage system which can be moved manually. The tiered grandstands provide seating for up to 2,540 spectators; some areas can be converted to standing grandstands. The seating on the parquet can accommodate up to 1,650 spectators. Additional seating and standing places are available on the surrounding walkway. The space behind the tiered grandstands is used for backstage facilities, production and artist areas, catering facilities, sports facilities such as changing rooms, WCs and trainer offices. Furthermore, the backstage area has additional rooms for production which can accommodate functions such as a kitchen catering for artists.

For the purpose of accommodating smaller events, specific areas of the arena can be separated using opaque curtain material, so-called stage molleton, so that an agreeable intimate atmosphere can also be created for these. Visitors are supplied with drinks and snacks from four fixed catering points, two on the first floor of the arena and two in the foyer, as well as from mobile counters. The arena and the foyer have separate WC facilities. This means that both units can be operated separately. For smaller events, such as private functions, only the foyer is used.  Depending on the type of event, the concrete floor of the arena is covered with an additional floor covering. For example, for ball game events, a sprung floor with a click-on system can be installed by the operating organisation within two days. A large storage area for the movable flooring as well as additional storerooms for items such as movable seating are provided within the building directly adjacent to the events area, thus ensuring that transport distances are short. With its clear height of 13 m, the arena is even suitable for international volleyball matches.

With its VIP boxes for 10 persons each and the club area on the first floor, EmslandArena provides space for up to 200 guests wanting to attend events in a special setting. VIP guests are screened from the other spectators via a separate entrance from the parking area and by a balcony in front of the box. In addition, a small preparation kitchen is available for the supply of food to the VIP area. If required, catering equipment can be transported to the first and second floors via a goods lift. 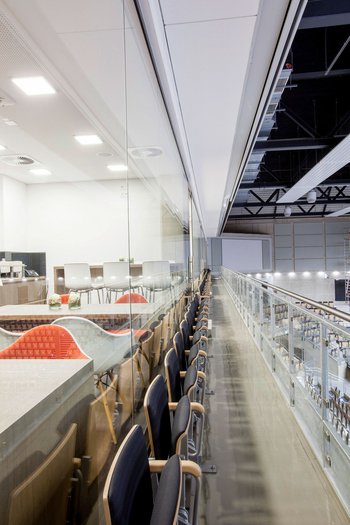 The entire arena is controlled from the arena control room. This room has a link to the duty rooms of the fire brigade and the police using appropriate communication technology. From the respective duty rooms it is possible to simultaneously control technical safety equipment such as the fire alarm system, smoke detectors and video monitoring system for the early detection of dangers. An overview of the entire arena is provided by a dome camera with zoom and swivel function.

In view of the fact that the radio communication with the fire brigade is not possible without some limitations owing to the reinforced concrete construction, it was necessary to install a building radio system for official bodies and safety organisations. The system is used by the fire brigade as well as by the police and rescue service. Alarms are issued via a voice alarm system, which is controlled via the fire alarm system. This system is also used for the public address system within the arena. It can also be used to make announcements and to play background music throughout the entire arena.

Prior to its opening at the end of November, the arena was used for two smaller concerts and for a sports training event that tested its functionality. Various operational aspects and technical services functions, from visitor handling through to the services installations and acoustics within the building, were checked in order to ensure that the first large event could be handled without any problems. After the two so-called "soft pre-openings" and the sports event, a one-month fine-tuning phase started.

The EmslandArena is also used for events with a sound level of up to 95 dB(A), such as concerts. Owing to the position of the venue in close proximity to a residential area, it is subject to severe restrictions regarding sound emissions. In order to comply with these, EmslandArena has been designed as a black box, entirely without windows. Only the linked foyer has glass doors. On the outside a noise attenuation wall has been built to protect the residential area against noise emissions, such as those occurring during loading and unloading operations at the arena. All lighting in the arena consists of LED lamps.

Given that no daylight penetrates into the arena it is possible, on the inside, to arrange a wide range of lighting scenarios with the dimmable LED lighting, irrespective of the time of day or the season. With a lighting power of 1,200 lux, the lighting system ensures that the image for TV transmissions is clear; it is also adequately sized for more important ball game events. The normal lighting level in offices and residential property is only 500 lux. Owing to the arrangement of the lamps and the relatively high luminous intensity, the court area is illuminated almost without shadows. Prior to making a final decision on the type of lighting, the client had contacted various television stations in order to be able to comply with their technical requirements for television transmissions. In addition, the LED lighting has the advantage that it can be switched off without time delay and can be gradually dimmed, thus saving electricity, whereas conventional floodlighting can only be mechanically dimmed using a flap installed in front of the light source.

Beneath the cantilevering roof, an installation of LED lights provides a radiant face to the events venue in darkness. Part of the facade with a U-shaped layout was fitted with profiled glazing. When this is irradiated with glancing light from above, the impression is that the entire facade is lit. This has the effect of creating a strong attraction for visitors, even from afar.
If, during events, visitors standing in front of the building throw objects or push and shove, the facade will not suffer any damage. To achieve this, the metal cassettes were mechanically reinforced so that they can withstand impact and higher loads.

During events with up to 5,000 visitors, EmslandArena has to comply with strict safety requirements. Mechanical smoke extraction with a flow of 520,000 cbm/h ensures that, for a period of 15 to 20 minutes following the detection of a fire, a smoke-free layer is maintained on the first floor. The smoke is extracted by eight extraction fans. This provides a clear view and enables the fire brigade to rescue people and fight the fire. A switching matrix was installed to control the smoke extraction process. A few seconds before the eight extraction fans come on a warning is sounded, the voice alarm system is activated and the escape doors open automatically. The performance of the smoke extraction system was tested in a cold smoke test and confirmed in a hot smoke test. Prior to the installation, the time required to evacuate the building and the temperature development in various parts of the building in the case of a fire were established with the help of simulation.

During the setting-up stage, the doors of the arena are open until shortly before the start of the event. During the cold season it is therefore impossible to achieve a constant room temperature at reasonable expense via the ventilation system. For this reason, infra-red radiators are available in the arena; they work not by heating the air but by heating the respective surfaces to a comfortable temperature. When the doors to the arena are closed, the ventilation system is used to boost the indoor temperature.

Owing to its multi-functionality, EmslandArena is a new events centre for national and international music, sports and entertainment events with an importance that goes far beyond the Emsland area itself. The EmslandArena venue is well known beyond the local region and is creating synergy effects because the events spectrum is sustainably expanded and parallel events can be staged – even with longer setting-up periods. The close interaction between architecture and services installations ensures that different functions and requirements can be complied with.