New construction of main fire and rescue station in Dorsten

The Dorsten main fire and rescue station on the Wehner commercial estate was ceremonially handed over to the public on 12 and 13 June 2010. A new building had become necessary because the old fire station dating from 1929 no longer complied with modern standards and could not fulfil current high technical requirements. 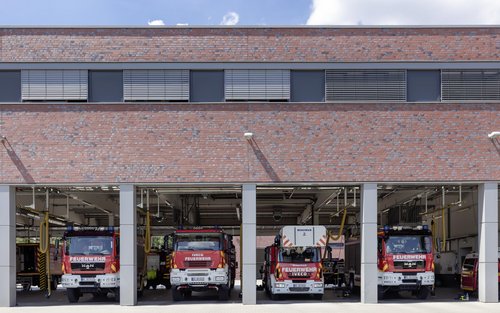 The new two-storey building for the main fire and rescue station in Dorsten presents itself as a stand-out, meandering building with the training tower marking the end of the configuration. The U-shaped fire station building is sub-divided into the tracts for the actual fire station and workshops. The facade has been designed with red facing bricks and grey window elements. The fire station itself comprises the vehicle sheds, changing rooms for the fire and rescue personnel, plant rooms and cleaning facilities.

The design of the circulation for the fire station ensures that the movement of incoming and outgoing vehicles on the site is separate, including separate in and out drives, so that firefighting vehicles can leave the site quickly and without any obstacles.