Refurbishment of the "Schwimmoper" in Wuppertal

When there is no suitable term for describing what is perceived, a new term is occasionally adopted. This was the case with the Johannisberg city pool in Wuppertal, which was given the name "Schwimmoper" because its elegant appearance is reminiscent of the splendid architecture of opera houses. 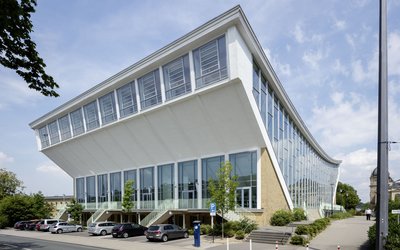 The Wuppertal "Schwimmoper" had to be substantially refurbished, modernised and extended because it had suffered damage and no longer met modern functional requirements. The client, Gebäudemanagement der Stadt Wuppertal (GMW), wanted to create a modern sports pool to international standards that was suitable for holding swimming competitions. This meant that the facility had to have a 25 m pool and pools for water polo events.

At the same time, fitness and sauna facilities were to be incorporated in the facility. These intentions had to be modified to accommodate the stipulations of the Listed Buildings Authority, which were aimed at largely retaining the listed building structure and fabric. The entrance area of the facility was completely dismantled and reconstructed. The proportion and street alignment of the former entrance building were exactly replicated by the new construction. The internal courtyard was covered over and now serves as a modern foyer, with barrier-free access to all parts of the building.

The pool was turned by 90 degrees in order to achieve a 25 metre pool that complies with competition regulations. The 10 lanes of the pool are used by athletes, who can be viewed by spectators from the two parallel grandstands. The former 10 m diving board was replaced by a moving wall, which can reduce the 30 m long pool needed for water polo to a length of 25 m for swimmers. The exercise pool located behind the main access route was enlarged and, after a technical overhaul and repair of the sealing joints, was returned to the original 1955 condition using replicas of the original mosaic images.

The eastern and western grandstands, with a total of 1,550 seats, were refurbished and connected via a new gallery in order to improve access and escape routes. New features include a sauna landscape, a fitness area and new restaurants. The sauna area has been located in the eastern wing of the entrance area. The front of the glass extension to the pool building features a water wave motif over all of the glazed area for privacy reasons. Part of the sauna area is taken up by the so-called salt grotto, with wall tiles consisting of genuine salt stone. The fitness area and administrative offices are located in the west wing.

The reinforced concrete beams of the roof construction, which were exposed as part of the refurbishment work, revealed extensive damage to the concrete and steel, which had been caused by the absence of efficient thermal insulation. Using an ultrasound detection system, the entire reinforced concrete structure of the roof of the building was investigated for defects. In view of the fact that not only the roof of the main building, but also those of the two adjoining changing room wings had been constructed using prestressed slabs, each tensioning steel had to be investigated and marked in order to ensure that no members of the tensile construction were damaged when core drilling had to be carried out to the slab. In some areas, the ceiling slab had to be stabilised by applying spray concrete and inserting additional reinforcements.

After a design and construction period of almost five years, the "Schwimmoper" in Wuppertal was reopened in March 2010. The success of revitalising this historic property is demonstrated by the fact that, today, the "Schwimmoper" is also used for film shows and musical events.