Sustainability, efficiency and climate protection – these values are often espoused but rarely adopted. Stadtwerke Lübeck sets a good example. With the construction of its new company headquarters in timber construction to Passivhaus energy standards, it not only complies with the most exacting energy conservation standards, but also provides modern offices with a unique atmosphere to over 400 members of staff.

Stadtwerke Lübeck is the most important utility company in the Lübeck economic region and also one of the largest companies in Schleswig-Holstein. The company supplies about 130,000 households and companies with gas, water, heat, internet and telephony services. In order to concentrate its previous operating facilities in one location, the company organised a prequalification competition. In the resulting negotiation procedure, Ed. Züblin AG, Direktion Mitte, Thuringia Area, was able to secure the contract. The company then commissioned pbr AG to carry out the scheme design for the planning application, and the detailed design. The design for the new building and the functional specification and cost estimate were produced by Klein Architects from Budenheim. After a construction phase of only one year, the entire Stadtwerke administration was able to move into the new building to Passivhaus standard at the end of 2014. The building provides 256 offices, conference and seminar rooms as well as a Service Centre and a restaurant for the members of staff.

Glass, greenery, fir and larch wood determine the facade design, and successfully portray the environmentally benign image of Stadtwerke Lübeck to the outside. Above and below the windows, untreated smooth larch wood panelling in tongue-and-groove construction is used. Larch wood is a renewable raw material and, with PEFC certificate, is not only particularly ecological but also boasts very good insulation properties and involves low maintenance costs. Grey fenestration bands divide the timber facade at the level of the four storeys. The windows consist of a compound construction with powder-coated aluminium on the outside and fir wood on the inside. Fibre-cement panels with a smooth lime green surface interrupt the fenestration bands at regular intervals, thus giving the elevation a lively appearance. All windows comply with the Passivhaus standard, i.e. they are highly insulated and fitted with triple-glazing. On the south, east and west facades, the windows are fitted with screening elements that are installed concealed behind the timber facade panels; these elements can be individually controlled from inside. 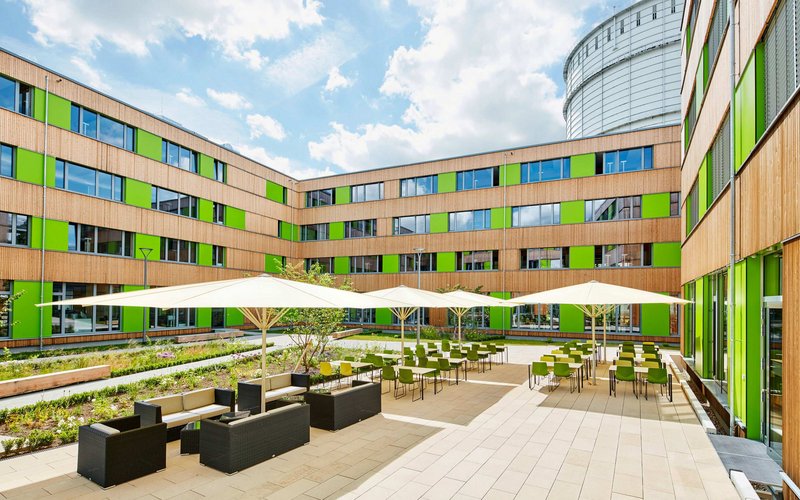 Seen from the outside, the new building for Stadtwerke Lübeck appears as a rectangular complex with rounded corners and differing side dimensions. From a bird’s eye view, the rectangular new complex consists of two L-shaped tracts which create a generous and light-flooded inner courtyard between them. On one side of the building, the two tracts share the entrance area, a south-facing foyer with a width of 13.50 m. The generous window facade consists of a mullion/transom glued laminated timber construction with triple-glazing to Passivhaus standard, and extends over all floors thereby highlighting the entrance area to the administration building in an impressive way. This area is left open without intermediate floors so that the construction height of the building is open to view up to the third floor, creating an imposing impression. A steel-reinforced concrete stairwell leads from the foyer to the building tracts. The floors of the two independent parts of the complex are linked by bridges. On the side opposite the foyer, on the ground floor, is a staff restaurant which is also available to external seminar participants. Storey-high windows provide a view to the landscaped inner courtyard. The courtyard can also be used for general relaxation when the weather permits. A "joint" between the building tracts is used as the entrance and exit of the inner courtyard. At this point, the different storeys are linked via open bridges, which are accessed via a spiral staircase. In the case of a fire, this also serves as an external escape stairwell.

The main loadbearing structure of the building consists of a timber construction. It comprises glued laminated timber uprights and beams which form the structural skeleton of the building. Cross-laminated timber elements supported by the upright and beam construction form the decks between floors and provide horizontal rigidity to the building in combination with the steel-reinforced concrete access cores. Additional horizontal rigidity is provided by building-high reinforced concrete wall slabs, which are used to separate fire compartments. These walls also absorb any wind forces acting on the facade. In addition to the access cores, the partial basement floor and restaurant area were constructed in reinforced concrete.

In view of the fact that the client wanted to keep the timber construction open to view, it was particularly important to devise a suitable fire safety concept. It was also stipulated that the new building should not have to be fitted with a sprinkler system, a device commonly used in timber buildings of this size to compensate for fire risk. This was achieved by sub-dividing the building into three fire compartments, which are separated by building-high reinforced concrete wall slabs. The compartments were further sub-divided into smaller functional units of 400 m² each. The fire resistance class stipulated was F60. To achieve this, the cross-sections of floor decks, uprights and beams were increased beyond the pure structural requirement to ensure that, even after exposure to 60 minutes of fire, there would be sufficient undamaged timber to maintain the integrity of the building structure. Non-loadbearing internal and external walls were clad with OSB board and gypsum-fibre panels, which provide the necessary fire resistance. Partition walls were constructed in drywall construction with metal studwork.

Timber as an atmospheric design element

The interior design of the new building was not only influenced by the open timber construction, but also – significantly – by the loadbearing structure. To achieve this, uprights and beams form part of the conceptual design, thus ensuring that the timber construction and timber generally as a material are prominent as design elements that are open to view and deliberately accentuated. In this way it was possible to create a unique atmosphere while providing the necessary room divisions. Given that services such as electrical wire trays, ventilation ducts and water pipes are installed beneath the ceilings, it was necessary to penetrate the timber downstand beams at certain points. In some areas the services installations were concealed behind ceiling sails, while in other areas they were kept open to view in order to emphasise the characteristic openness of the construction.

The new office building sets new standards with respect to climate protection. Built to Passivhaus standard, it meets top energy conservation requirements. Sustainability, efficiency and climate protection were the guiding values for the design and construction as well as for the complete fit-out of the building. In consequence, only certified timber was used and all processes of the different trades and of procurement were analysed in terms of their CO2 balance. The timber used for the loadbearing structure was sourced from PEFC-certified suppliers, and the larch wood for the facade construction originates from FSC sources. As a result, the construction alone saved about 90 percent of CO2 compared to constructions using conventional materials. In addition, a compensation program was put in place to ensure that the CO2 emitted in the course of material transport operations will be absorbed again within one generation. A total of 2,438 m³ of timber was used in the construction. This quantity is produced in German forests over a time period of just 10 minutes.