Refurbishent and extension of the Kiel-Holtenau Federal Waterways Office

On the Kiel-Holtenau lock island, which borders the canal between the North Sea and the Baltic, stands the listed Federal Waterways Office which dates from 1896. This building no longer met the requirements of a modern office and administration building and therefore a design competition was organised in 2009 with the aim of securing a refurbishment in accordance with historic building criteria and creating a new building that would accommodate the various functions dispersed across the island.

An important aspect of the new urban design concept on the lock island was that the new building next to the listed building was to have its own value and independence, but not dominate the existing building. With its design for the new building, pbr AG secured first place in the competition in 2009 and proceeded to implement the project, covering all phases of the design. The new, angular-shaped building features slanting eaves and a conspicuous roof landscape, with partially overhanging slanted side walls on the east and west facades. With the help of the special shapes used for the walls and roof areas, a special design has been created on the lock island which highlights the conspicuous architectural contrast to the existing listed building. The specific geometry evokes nautical parallels, and required a special face brick format as well as individually shaped corner bricks. 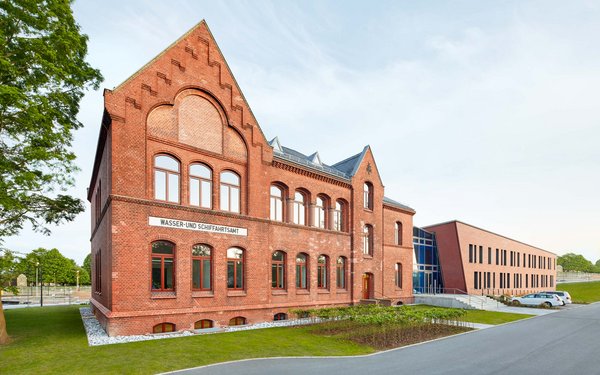 In order to resonate with the colour and feel of the existing building, and to match typical architectural features of the locality, facing brick was used as a facade material. In spite of the unusual geometry of the building, it fits harmoniously into its environment. The new building is linked to the existing building via a transparent link building. The external wall of the new building that slants towards the atrium was finished with a sandwich panel system which was faced with the original facing brick. The bright and welcoming atrium serves as main entrance to both buildings and includes a lift for barrier-free access, as well as an open central staircase. The screening elements used for the atrium are the result of a "Kunst-am-Bau" (art in buildings) competition.

The existing building, a two-storey office building dating from 1895, was constructed with loadbearing brickwork walls on pile foundations and was to be largely preserved and/or returned to its original condition. For this purpose, the dormer windows that were subsequently built on the east side of the building were removed, and historic triangular dormers for providing light to the attic were re-established on the north and south sides of the building in accordance with guidance from the Listed Buildings Office and to the original plans for the building. Likewise, the roof surfaces were re-boarded and covered with classic slates in accordance with the original 1895 version.

The facade – with its prestigious Wilhelminian brick in header bond – had to be preserved, which meant that repairs were carried out by replacing individual bricks in the walls, ledges and windowsills. In consultation with the State Office for the Preservation of Historic Buildings, the existing plastic windows without sub-division were replaced by classic timber windows with a central partition. The new thermally insulated windows open outwards, thus replicating the typical window design of the time.

A special challenge was to revive the historic layout of the building while filling the space with functions that are appropriate for a modern office building. In order to re-establish the original room formats, the intermediate level inserted in the 1950s was removed and the attic floor was returned to its original status. Special emphasis was placed on returning the historic board room to its original condition. Using a special system of colour analysis it was possible to establish the historic colour scheme for this room and in the corridor, and to implement a new interpretation of it. In the board room, genuine wood panelling, which also functions as an acoustic element, was installed in place of the painted wood panelling. Furthermore, the timber floor and the door were renewed in consultation with the State Office for the Preservation of Historic Buildings. The offices were fitted with hardwearing fitted carpets while in the corridors and the stairwells it was possible to repair and, in parts, to renew the historic terrazzo flooring. The stairwell was converted into a mandatory stairwell by installing glazed fire doors.